From our first round of usability testing to our last, we increased the payment completion rate on Resurgent's customer portal by 150% and improved user confidence. 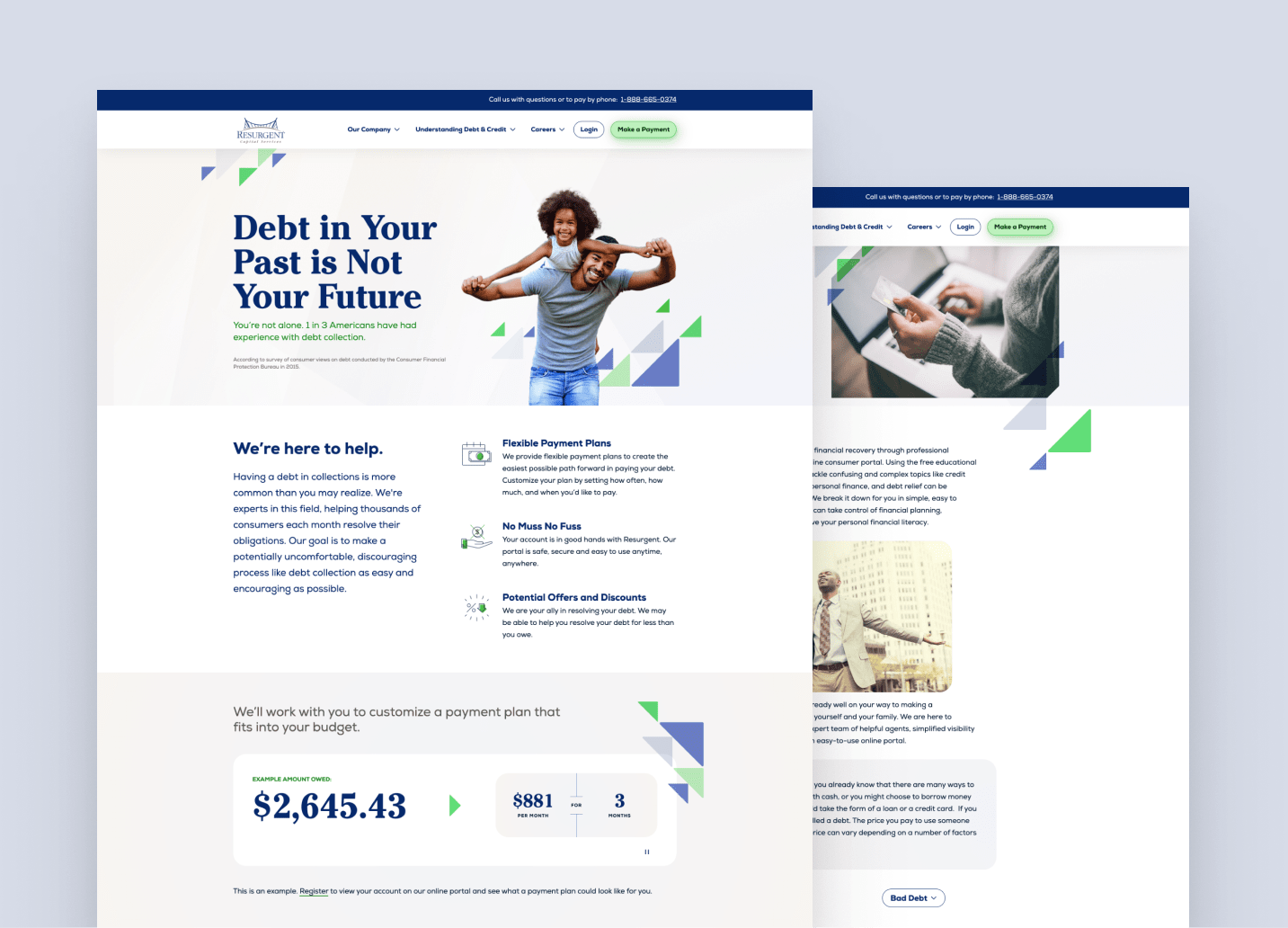 Resurgent Capital Services is an industry-leading financial services company that manages international and domestic debt portfolios and works with some of the nation's largest credit grantors and debt purchasers.

Resurgent needed a customer portal that made it easy for their clients to confidently select a payment plan.

Sparkbox has worked with the Resurgent Capital Services team for the past couple of years to improve the look and feel of their public web presence. While our work with them on a refreshed design and more empathetic copywriting increased user engagement, their customer portal and account registration workflows had not been touched and were next on the list to modernize.

Resurgent felt they had an inefficient account registration process and that their payment portal could be confusing to some users. The entire registration and payment process needed to instill trust and credibility while decreasing the number of users who abandon the page. Resurgent just wasn't sure where to start to get the greatest return on their investment. They wanted to find out which improvements were most needed for usability and which improvements would generate the most business value so that they could prioritize their roadmap for design and build.

Putting Designs to the Test

To begin, we brainstormed together and wireframed potential improvements to the account registration process. We decided to usability test a prototype of the new process. The test would include tasks to benchmark the existing end-to-end experience, from landing on one of their public websites to registering an account and scheduling a payment via their portal. This usability test would take around 10 or 15 minutes, and we would administer it unmoderated. Since we didn't have to allocate resources for moderators' time and because we tested with wireframes to keep design investment low and speed high, we had room in the budget for multiple rounds of iteration and testing.

The first round of usability testing told us we were on the right track with our new account registration process, but users indicated that they did not feel the site was trustworthy enough. The benchmark test also uncovered a deficiency in the payment portal—only two of five usability test participants were able to successfully set up a payment. As we all watched the test recordings, the testers' experiences and frustrations resonated with the Resurgent team, and we went back to the drawing board for the portal. We designed a new layout and an improved workflow for the portal and made some adjustments to improve credibility. We were ready for another round of testing.

Our next round of testing proved that our new portal concept was a winner. It also gave us a few more ideas that could instill more trust. After incorporating our changes, it was finally time to invest in high-fidelity design and give it one last round of testing.

In the end, every single participant successfully set up a payment. This was a major user experience and business win—in our first test, only two of five participants had been able to schedule a payment.

And we significantly improved user trust. Based on our iterative usability testing, we were confident the developers would be implementing a strong design that would remove the technical barriers to setting up an account and making a payment. And this design would increase the users' trust in the company.

Because additional design changes may be made in development, we'll test again after integration to validate not only the design but all of the microinteractions and animations that evolved alongside development.

We removed complexity for users, which increased trust in the company. And we increased the number of successful payments set up from 40% to 100%.